We use cookies to ensure that we give you the best experience on our website. If you continue to use this site we will assume that you are happy with it.OkNoPrivacy policy
You can revoke your consent any time using the Revoke consent button.Revoke consent
Return to previous page
Home In the News

MISS MACAROON IN THE METRO NEWSPAPER

Meg and Harry pick wedding guests out of the ordinary

A SURVIVOR of the Manchester terror attack, an Afghanistan war veteran and a deaf schoolboy who teaches classmates sign language are among 1,200 members of the public invited to Prince Harry and Meghan Markle’s wedding.

In a break from tradition, the couple have not included political leaders on the guest list. It means prime minister Theresa May and president Donald Trump will not attend the ceremony at Windsor Castle.

Kensington Palace said the decision was based on the fact Prince Harry is only fifth — soon to be sixth — in line to the throne. The couple have invited 600 guests with whom they have personal connections to the May 19 service at St George’s Chapel. Another 1,200 people will be welcomed into the castle’s grounds.

They include Amelia Thompson, 12, who was caught up in last year’s Manchester Arena bombing. She has invited Sharon Goodman — the grandmother of 15-year-old Olivia Campbell, one of the 22 concert-goers killed in the terror attack — to join her. Amelia said: ‘I’m so excited to be going.’

Also invited is Rosie Ginday (pictured below), 34, whose social enterprise baking firm Miss Macaroon provides training for disadvantaged young people in Birmingham, which the couple visited last month. She said: ‘They were so passionate and took a real interest.’

MISS MACAROON TALKS TO THE GUA... 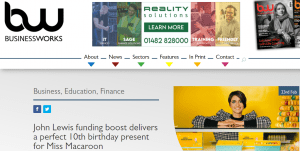 24th February 2021 / 6 / 0
Miss Macaroon awarded funding as the company reaches its 10th birthday. In honour Miss Macaroon’s work as a Social Enterprise over the past decade, the... Continue reading